The National Archives celebrated a centenary of the first meeting of the Archives Council on 4 November 2021 by opening an exhibition dedicated to the professor of history and the founder of Estonian archival science Arno Rafael Cederberg (1885–1948).

The University of Tartu was in early 1920’s given a boost by scientists from far and near, among those nine Finnish scholars together with Arno Rafael Cederberg who was elected professor of the history of Estonia and the Nordic Countries at the University of Tartu in the autumn of 1919. His passion was organising Estonian archives administration, Cederberg announced upon arrival in Tartu why and how Estonian archives administration needs to be built up: “It is absolutely essential that Estonians establish a national archive and find a suitable up-to-date location for it, which must be done as soon as possible. No educated nation can get by without a national archive.”

The Archives Committee chaired by A. R. Cederberg that met on 3 March 1920, and thereafter formed for the Archives Council gathered firstly on 4 November 1921, deemed necessary to establish the State Archives in Tallinn and the Central State Archives in Tartu, which, by preserving historically important records, was to become a research base meant for scholars and students. During his Tartu years, along with a teaching work and archives management, Cederberg participated in relaunching the history panel of Learned Estonian Society, served as the first board chairman of the Academic Society of History (including establishing the Historical Journal), and served as chairman of Estonian Literary Society. At the same time, he continued his research and enthusiastically introduced discoveries from archives in popular science articles published in Estonian, Finnish and Swedish newspapers.

National Archivist Priit Pirsko has explained the role of A. R. Cederberg as follows: “There is no doubt that Estonian professional archival science could not been born without professor Arno Rafael Cederberg. A century ago, there was created a system which is still today a basis for collecting, preserving and giving access to our written national heritage.”

A. R. Cederberg’s granddaughter, professor of museology at the University of Lund, Solfrid Söderlind, has donated to the National Archives of Estonia many unique pieces and documents from the legacy of her grandfather. Exhibition opened at the main building of the National Archives in Tartu includes the copies of professor’s doctoral hat of the University of Helsinki (1914), University of Helsinki master and doctoral diploma (1901, 1914), Uppsala University honorary doctorate diploma (1927) as well as other documents and photos, for example also a student petition with signatures collected for to support professor’s stay in Tartu in 1927. During the opening of exhibit, professor Solfrid Söderlind also donated the Order of the Cross of the Eagle, 3rd Class, bestowed on professor Cederberg on 22 June 1932, as well as Cederberg’s two laurel wreaths.

Exhibition dedicated to professor Arno Rafael Cederberg can be followed in Estonian and English, including a virtual display of digitised records. Exhibit can be visited from Monday to Friday at 9–19 on Nooruse 3 in Tartu. Everyone is warmly welcome! 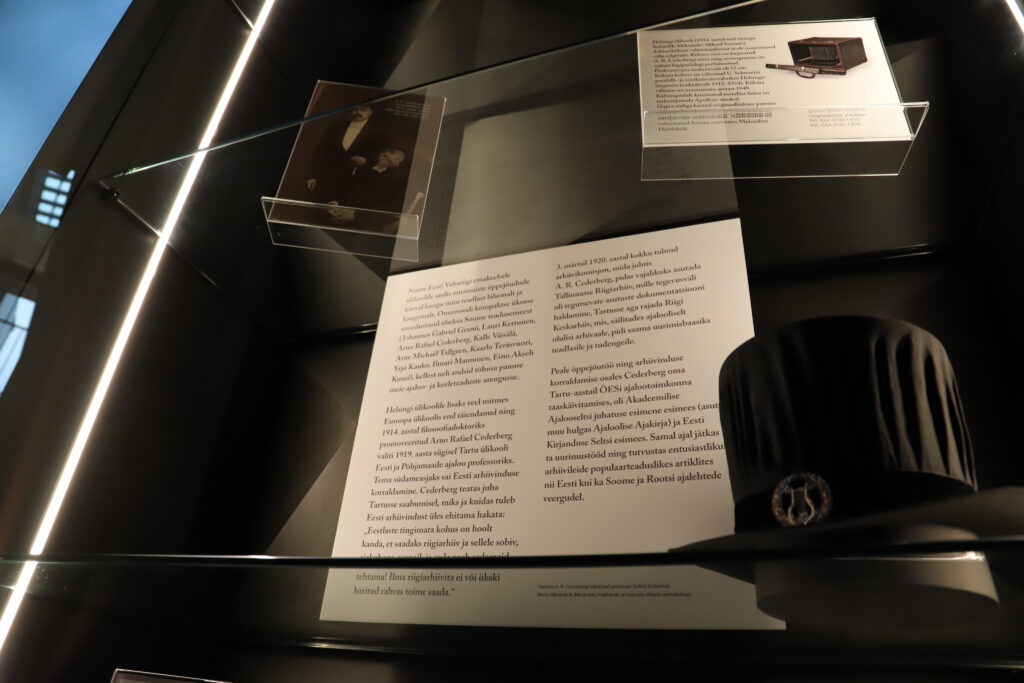